Kristen Bennett Marble has dedicated herself to serving the community and through her brilliant partnerships and initiatives — she is already making the church an institution that Mary Rigg Neighborhood Center is proud to work with. 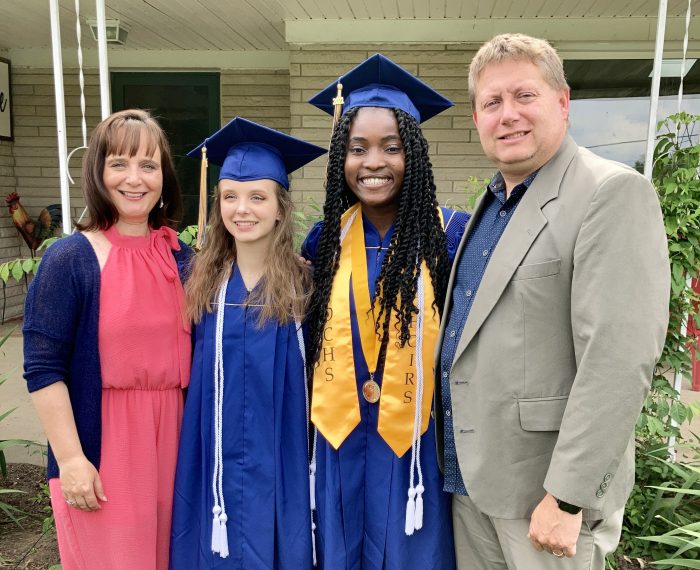 An “eternal optimist” is how Pastor Kristen Bennett Marble describes herself, and her perspective continuously influences the work she does at West Morris Church. Her optimism and passion have helped the Church grow, and she continues to build partnerships with West Indy organizations like Mary Rigg.

Even before she was officially a pastor with the West Morris Church, Kristen Bennett Marble had a vision for the church.

“I wanted our church to be a place… that if we were to close our doors, the neighbors would come and protest and say, “You can’t leave because you make an impact in this neighborhood,” and we weren’t really doing that at the time, but that’s kind of been the goal.” Marble said, “How do we come alongside the community and help contribute to flourishing?”

To promote and encourage this vision of “flourishing”, Marble builds partnerships with other organizations and churches.

While helping others is just a part of her nature, her path has not always been easy. Marble is open when talking about the various instances where her gender has been something people hold against her.

Marble is not alone; feelings of inadequacies tend to be very common among women – especially those in leadership roles. Marble acknowledges the strides she’s made and the achievements she has accomplished — but also recognizes that there is work that still needs to be done.

“I’m very aware of times in places that my voice hasn’t been included because I am a female. There’s been, not so much here, but where I pastored in Kansas and Montana, I was excluded because I was the only female. And so, it just makes me a little bit more aware of when I sit down at a table thinking like, okay, who isn’t here, whose voice isn’t being heard? And how do I make sure and make room at the table for those people?”

Marble’s ability to change her perspective and outlook has influenced a lot of the work she has done. When she is not excluded on the basis of her gender, she uses her position to seek out those who still are excluded. This focus is something that she discussed at a workshop, and the workshop was called “When the Front Door is Locked, Try the Side Door.”, which refers to the way she, as a woman, among many other women, cannot take the traditional paths to leadership because sexism is still very prevalent in the workforce. However, she used the presence of those barriers, and exceeded despite them. And she uses that creativity to continue helping others achieve their goals as well.

That creativity also positively impacts her work as a pastor. Marble saw how she was being discriminated against and instead of looking at it as another wall was being put up to keep her out, she looked at it as a new way to grow. Marble is constantly taking something that seems like a barrier, obstacle, or limit, and finds a way to turn it into an asset. With West Morris Church specifically, she used this way of thinking when undertaking such a large building.

“When I came in, I was like, “Oh, my gosh, we have this huge building, it’s almost empty all the time, and it’s expensive.”” Marble said, “And just kind of shifting the perspective of like, okay, what if we saw it as an asset? And what if we were open handed with it and generous with it? Rather than operating out of scarcity, what if we operated out of generosity and abundance?”

Asking those questions has led to numerous partnerships and programming that keeps the building full – even if it isn’t filled with her own church members. Among those partners, Mary Rigg Neighborhood Center enjoys Marble’s philosophy of operating out of abundance as it allows our organization to host programs in a larger space, making it COVID friendly.

The West Morris Church has also been home to multiple congregations, allowing churches to both meet independently and combined with Marble’s congregation. Most recently, she opened their doors to an African American congregation.

“…They had to shut [their building] down because it had mold.” Marble said “And so they were with us for over a year, just because they needed a space to meet as a church while they fixed up their building. And that’s been a really cool relationship, we actually have a combined service with them this Sunday. You know, it’s two churches, nobody knew each other, and we probably never would have crossed paths, but they just called us because we were close.”

Marble has also partnered with a Hispanic congregation, and all three have hosted joint services in which members of all three churches attended together. On top of these church and non-church partnerships, Marble makes sure there are additional services offered as well. One of these is the little free pantry stationed out front, it was added just after Marble started at the church and has grown a lot since then.

“Leading up to COVID, we had church people putting things in [the pantry], but it was really empty more than it was full, and something really shifted during COVID, in that a lot of community people really kind of adopted it as their own and more often than not, when I go to put stuff in it, there’s already things in it. And it’s not our church that’s done it, it’s been the community.”

Already, Marble has experienced a shift in the community. The Westside community is one that comes together to continuously donate food during a pandemic, hold joint services, and operates out of generosity. Marble has dedicated herself to serving the community and through her brilliant partnerships and initiatives — she is already making the church an institution that Mary Rigg Neighborhood Center is proud to work with.