THE TRANSFORMATION OF JAMES 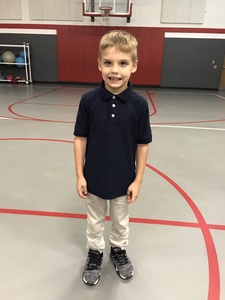 James Sr. became aware of Mary Rigg Neighborhood Center (MRNC) through a referral from his son’s, James, school. James Sr. would drop his son off to school bright and early in the morning due to his non-traditional work schedule. However, there were no morning activities available to expand James’ learning opportunities and he decided to turn to MRNC for help.

James Sr. and his son, James, was referred to Mary Rigg Neighborhood Center (MRNC) by James’, school in 2017. James Sr. would drop his son off to school bright and early in the morning due to his non-traditional work schedule. However, there were no morning activities available to expand James’ learning opportunities and decided to turn to MRNC for help.

James was a lively kindergarten student, full of constant energy and befriending everyone he crossed paths with. James was frequently the first child to arrive at MRNC’s Before School and greeted everyone with open arms. As James began to get acclimated to the program, the youth staff recognized a few challenging behaviors. James struggled with defiant behavior, a lack of emotional regulation, and impulsivity. Youth staff spoke to James’ father about these behaviors. James Sr. then shared that he was a single father and open to further assistance regarding James’ behavior both at home and school. Staff members worked with James Sr. to create a behavior plan for James which included connecting him to Tangram. Tangram is a partner of MRNC that facilitates social-emotional learning groups and cover topics such as self-regulation, emotional identification, mindfulness and character building.

James began participating in Tangram in the fall of 2018. He participated in weekly sessions for six weeks on self-control and emotional identification/regulation. Once those sessions ended, James Sr. and staff members reconvened to explore additional opportunities. In 2019, James returned to Tangram to participate in a new 6-week session on making and keeping friends. Throughout James’ involvement with Tangram, staff members noticed that James was able to verbalize his emotions and think through his reactions much better.

The most important thing staff members noticed was James’ new ability to verbalize his emotions and think before acting. James is also now familiar with emotional regulation techniques such as “High 5 Breathing,” and is able to implement practices he learned in the Tangram sessions.

James’ involvement with Tangram also opened communication with James’ father who shared that James talks about Tangram tools at home as well. James Sr. also feels that he is better supported since partnering with Tangram when it comes to managing challenging emotions and behavior and is comfortable discussing all aspects of James’ progress with the MRNC staff.

Learn more about Before and After School programs

Support Before and After School programs