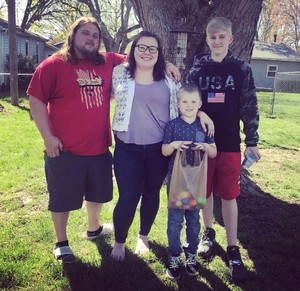 Meet Josh. Josh is a successful individual that has children, is in an intentional dedicated relationship, and is employed full time that includes benefits.

But, as a teenager, Josh had run into trouble. That trouble landed him in a juvenile detention center. While Josh was there, we completed his High School Equivalency (HSE) diploma (formally known as the GED).

Fast forward to adulthood. At 25, Josh became a father for the first time. Two years later, he became a father again through adoption. Josh realized that in order to support his family, he needed to find a job with sustainable wages, medical insurance, and stability.

Josh’s first encounter with Mary Rigg Neighborhood Center happened when he was 29 years old and he met Madison Eckert. Madison happened to be the Youth Program Coordinator at the center and knew there were many resources available that could get Josh to the place he wanted to be.

Josh was connected to Meaghan Owens, a coordinator of the Bridges to Career Opportunities Program. They worked together to find a program suitable for Josh and he soon became enrolled in the Solar Panel Installation Certification education program. At the beginning of 2019 (from February to June) Josh was active in everything from Job Readiness classes and pre-class testing. In June and through August, Josh was officially attending classes every Monday, Wednesday, and Thursday.

Balancing work, family, and classes was difficult for Josh and presented new challenges. At one point, Josh lost his job. But again, he found the help he needed through special funding that helped him pay his rent and overcome obstacles that were threatening his completion of the program.

On August 15th, Josh and his classmates took their final exams. Josh passed that exam and is now a Facility Supervisor with a local apartment complex. In addition to that, he and his partner, Madison Eckert, are licensed as a family to provide foster care to children in the state of Indiana.

Please help us congratulate Josh on his success! Through hard work, dedication, and personalized plans for success, Josh is the perfect example of how programming at Mary Rigg Neighborhood Center can change lives.